Most people living in the mild western areas of Europe think Central Europe is too cold for the outdoor cultivation of palms, which is true for most of the region. Hungary can be characterized as having a transitional climate between the maritime warm temperate climate of Western Europe and the continental cool temperate climate of Eastern Europe. The annual precipitation is between 500-900 mm, and the hours of sunshine are 1700-2100. The mean monthly temperature for the coldest month, January, is 0 to -4 deg. C (32-25 deg. F) and for the warmest, July, 19-22 deg. C (66-72 deg. F). The period with median daily temperatures above 10 deg. C (50 deg. F) is from the beginning of April until the end of October. On average, every 10 years there is a severe winter. The limiting factors for outdoor palm cultivation here in Hungary are the extent and duration of minimum temperatures each winter.

Position of the area within the country.

Hungary is situated in a basin almost interlocked by mountain ranges, the Alps to the west and the horseshoe shaped Carpathians from the north to the southeast. Plains dominate the landscape to the east and southeast, with hills and mountains to the northeast of the Danube. There, the mean extreme minimum temperature is between -17 and -20 deg. C (1 deg. F and -4 deg. F) each winter. In the far northeast, it ranges below -20 deg. C (-4 deg. F). A mixture of plains, low hills, and mountains dominate most of the area to the west of the Danube. The west and southwest are mainly milder areas, where the extreme minimum temperature in winter is -15 to -16 deg. C (5 to 3 deg. F). There, in favorable microclimates, palms can be grown outdoors.

During winter in urban areas, heat lost from buildings warms the adjacent air. Also, buildings block the free movement of winds, reducing the wind-chill factor. Thus the downtown areas can be around +5 to +8 deg. C (+9 to +14 deg. F) warmer than the outskirts of cities and towns during extreme cold weather.

Microtopography is an important factor in landlocked areas like Hungary, influencing the intensity of solar radiation and temperature. The southern slopes of hills and mountainsides at altitudes of not over 300m are warmer in spring, autumn, and winter than the adjacent valleys and plains. This is especially true on slopes situated halfway between the valley floors and the mountain peaks. This is where the phenomenon of "temperature inversion" occurs. Here, on clear still nights, during anti-cyclonic weather, when there is snow cover, heat is lost through drastic radiation.

These are the extremely cold nights that are dreaded by all "northern palm enthusiasts". Cold air flows down the slopes and accumulates in the plains and valley floors where it cools further while warmer air layers accumulate on top. The difference between the air temperature in the valley floor and the middle of the mountain slope can be around +4 to +6 deg. C (+7 to +11 deg. F) and in extreme cases, +8 to +10 deg. C (+14 to +18 deg. F). For example, during the abnormally cold weather of January 1997 the minimum temperature was -22 deg. C (-8 deg. F) in the plains and only -13 deg. C (9 deg. F) on the mountain slope 100 meters higher (Tenkes Hill, Siklós-Máriagyûd, SW. Hungary). Usually, the colder the temperature, the greater the temperature difference between the plains and the mountainsides.

When it is cloudy, radiating heat is not freely lost, so the temperature in the valley floor does not cool down too much. At those times, there is no great difference between the plains and the mountainsides - usually only +1 to +2 deg. C (+2 to +4 deg. F). This differential is typical under all weather conditions during the summer months.

Overall, on the mountain slopes, the extreme minimum annual temperatures range between -8 and -14 deg. C (18 and 7 deg. F).

The favorable mountain slope conditions described above occur in the historical wine growing regions of Hungary - along the adjacent hillsides of the northern shore of Lake Balaton ( from Badacsony Hill to the Tihany Peninsula) and the southern slopes of the Mecsek and Villányi mountain ranges (above Pécs and Siklós-Máriagyûd, SW Hungary). Also, the slopes in the SW part of Budapest offer similar conditions. In these regions figs (Ficus carica) and almonds (Prunus amygdalus syn. Amygdalus communis) have been grown in gardens for more than a century, also cypresses (Cupressus glabra, C. sempervirens), and an occasional Musa basjoo can also be spotted.

The first palm species tried out of doors and the most adaptable to our climate is Trachycarpus fortunei. Larger flowering specimens between 20-24 years old and 4-5m high can be seen. These were planted through the enthusiasm and efforts of: 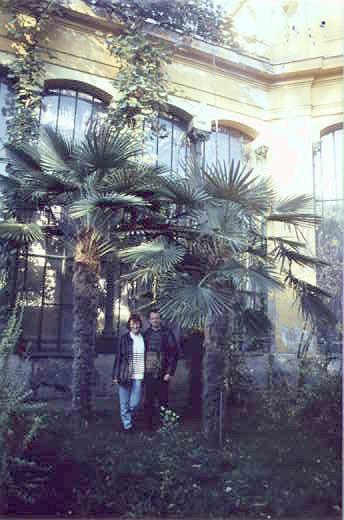 Other species successfully growing in some public and private gardens include young specimens of Chamaerops humilis (the heart of which is very sensitive to precipitation during our winters), Rhapidophyllum hystrix, Sabal minor (flowering too late for its seeds to ripen), and Trachycarpus wagnerianus, T. takil.

Unfortunately Trachycarpus martianus (Khasia Hills) is defoliated when the first freeze of -5 deg. C (23 deg. F) occurs, so it is too tender for us here. Possibly the same will apply for T. martianus (Nepal), and even T. latisectus (Sikkim) might not be hardy enough.

(Iran seed origin) is not hardy. Its roots easily rot, and it grows very slowly. Probably even specimens from more frost hardy provenance are more suited to a Mediterranean type warmer climate, needing a longer growing season with higher temperatures than in Hungary.

The hearts of all the young palms need to be protected from snow while the plants are still trunk-less. When maximum daily temperatures range constantly below +5 deg. C and there are several days with clear skies

and sunshine, palms, like most evergreens, suffer from "photo-chilling". This means leaves steadily turn yellow because cold stress is physiologically enhanced by solar radiation. Winter protection by totally covering young plants of all species is beneficial not only in protecting from snow and wind, but also from excess sunlight.

Hopefully, in the mildest microclimates, palms, with proper care, will become a common sight in gardens with a "southern touch".

«Back to BG-Map Hardy Palm Page

Top of This Page